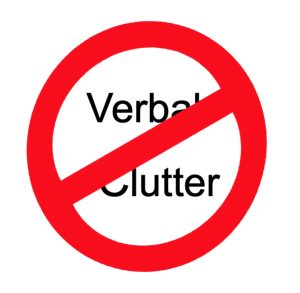 First, if you’ve never heard the term, “verbal clutter” is the annoying, habitual, repetitious use of words and sounds that are unnecessary to communicating your message.

I first learned about verbal clutter when working with a speaking mentor to improve my presentation skills. It was the hardest thing in the world to eliminate my unconscious habit of saying “you know” way too often. Reviewing recordings of all my presentations and slowing down are two strategies that helped me do so. Having to edit a million “you knows” out of recordings I wanted to re-purpose also helped cure me of that bad habit.

Examples of common verbal clutter words/phrases are “you know” and “know what I mean” and “OK.”

What’s the Problem with Verbal Clutter in Coaching?

When it comes to coaching, two of my highest values are:

In coaching, we empower our clients by focusing on them 100% and the coach is as invisible as possible. When we insert our opinions, advice, suggestions, ideas, thoughts, judgments, etc. we are coming from ego and not coaching cleanly.

For example, I’ve taken the stand to remove the word “I” from the coach’s vocabulary when communicating with your client. More info here

More about how to empower your coaching clients here and here.

Language has meaning and power, and in coaching, since our primary tool for helping our client is to use language, it makes sense that we need to communicate accurately and precisely to be effective.

For example, the words “feel” and “healthy” are so vague, broad, and imprecise as to be useless, and even problematic in coaching. More about that here and here.

Which brings us to Verbal Clutter.

Two problems occur to me about verbal clutter in coaching:

1. It can be distracting and annoying to the client, which diminishes the effectiveness of coaching them.

2. It can be a disguised way for the coach to insert themselves, which comes from ego and is not coaching cleanly.

Think of the classic “Mm hm” response common in the helping professions. The client will say something and the helper will occasionally say “Mm hm” or “Uh huh,” ostensibly to let the client know they hear, understand, and affirm what they’re saying.

Why is that a problem? For the two reasons stated above; when overused it can be distracting and annoying to the client, and it’s a disguised way for the helper to insert themselves while the client is talking.

So now that I’ve laid out the problem, I invite you to be the judge of how you communicate with your clients. My only request is to make conscious choices of how you do so and coach as cleanly as possible.