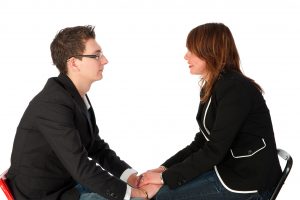 1. Be mindful that you are coaching their RELATIONSHIP which is the space between them, and you can’t do so if each partner focuses on YOU.

The easiest and most important strategy for facilitating dialogue is, whenever possible, to direct their attention AND responses to EACH OTHER and not to you. Be sure to discuss this during Intake when on-boarding your new clients so they know what to expect.

It will take some practice to overcome the understandable habit developed when coaching individual clients who speak directly to you 100% of the time and it might feel weird at first to ask a question and they answer by directing their response to their partner instead of to you, but the whole point of coaching a couple is to support and deepen their connection with each other, and this is how you do so.

2. Craft your coaching questions to facilitate dialogue. For example:

“What’s your reaction to that?” is a question you might ask in individual coaching and the client might understandably think they need to respond to you since you are asking the question.

“What’s your reaction to what Sally just shared with you?” is a question with an embedded reminder to respond to their partner. At first they might respond to you, but after a few reminders at the beginning of a couples coaching relationship they should develop the habit of directing their attention to their partner as long as your questions are facilitative.

3. As with all good coaching questions, be as neutral as possible by not being directive or imposing judgment/interpretation. For example:

“How would you like to respond to Sally’s anger about X?” imposes your interpretation of Sally as being angry and is not neutral.

“How about sharing your feelings with Sally about X?” is directing the client to “share feelings” (whatever that really means) and is not neutral.

“What’s your reaction to what Sally just shared with you?” is facilitative and neutral, perhaps too neutral.

“How would you like to respond to what’s going on for Sally right now?” is also facilitative and neutral with the enhancement of using your Coaching Superpower to focus the client’s attention on responding to their partners experience rather than their own thoughts and feelings and needs, which would be preferred in most situations for the Receiver role.

The above “enhancement” might seem like a small nuance, but it is an important one in coaching couples- if one partner is being reactive, facilitate their dialogue by helping their partner be a supportive Receiver rather than simply reacting to their partner’s reactivity, which they can do all on their own without your help.

4. Angel on the Shoulder is a gentle, non-intrusive way to prompt and support either the Sender or Receiver to communicate effectively by providing a suggestion DURING their dialogue in a soft, quiet, manner.

In the above example Sally is upset and you asked her partner Joe “How would you like to respond to what’s going on for Sally right now?” Two scenarios:

– If Joe seems uncomfortable or struggling you can play Angel on his Shoulder by softly, gently prompting “What do you need from me right now?”

– If Joe responds in a way that doesn’t seem effective, you can steer him to get on track and be supportive by softly, gently prompting “What do you need from me right now?”

The “soft” and “gentle” approach is non-intrusive because it makes it easy for the client to accept or ignore the prompt in the moment. A soft, gentle prompt will be accepted more readily and be more facilitative than a stronger one at full volume. Your volume and tone communicates non-verbally that you are making a gentle suggestion, not being directive.

The prompt itself should be short, simple and to the point using the exact language you suggest the client use such as “What do you need from me right now?”

5. Finally, always be mindful of the purpose or desired outcome of the dialogue. As always, your goal is to help them move forward towards their goal, not just “talk” or “communicate” about their feelings, stories, the past, etc.

While we value connection and “telling your whole truth” in coaching couples, those are part of helping your couple towards accomplishing goals that are clearly identified in their coaching agenda (their reason for hiring you). In relationships, coaching, and relationship coaching, communication is a means to an end, not the end in itself.